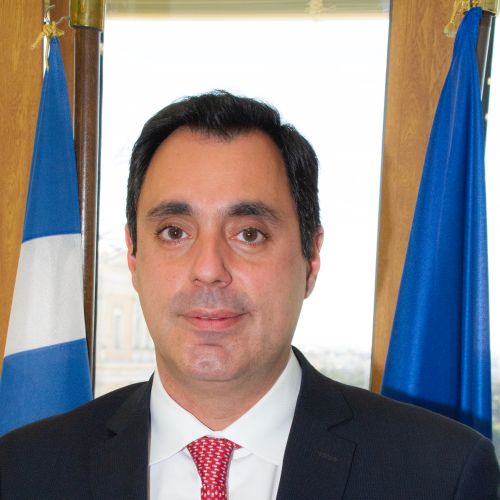 Secretary General for International Economic Affairs, Chairman of the Board, Enterprise Greece

Ioannis Smyrlis, the Secretary General for International Economic Affairs, is a political scientist, graduate of the Department of Political Sciences and Public Administration with a Postgraduate Diploma in International and European Relations from the University of Athens (EKPA). He represented the Ministry of Interior during the rotating Greek Presidency of the EU in 2013-2014. He was appointed Press and Public Relations Consultant of ODIE SA. in 2009-2010, Adviser to the General Secretary of the Ministry of Shipping in 2007-2009, as well as Adviser to the General Secretary of S.E.P.E. in 2005-2007. He was elected as the first Greek president of the Youth Organization of the European People’s Party (YEPP) in 2007-2009, i.e. the largest political Youth Organization in Europe. He served as Secretary of International and EU Relations of Nea Democratia Party and has been a Member of the Political Bureau of the European People’s Party (ELK) in 2013-2019. He was a European fellow of the German Marshall Foundation in USA, as well as a member of the EU Youth Assembly for the European Constitution in 2003.